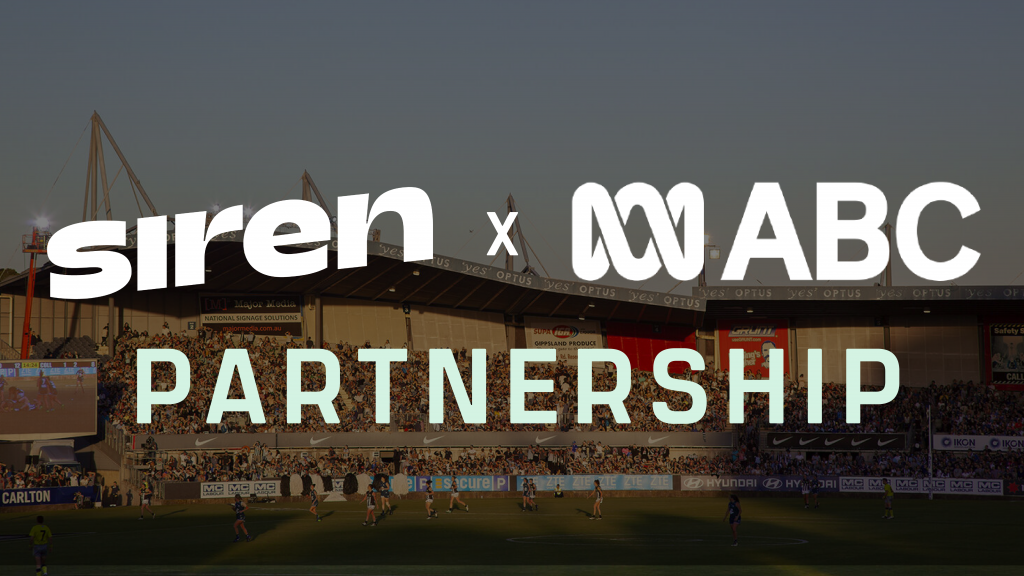 Siren and the Australian Broadcasting Corporation (ABC) have teamed up to bring you stories and insights from women in sport.

This partnership promotes our elite athletes and weekend warriors in community sport. We also promote the work of expert and emerging women writers and photographers of women’s sport in Australia.

“We’re excited to partner with our national broadcaster. And to build on our work championing women in sport and add more to the ABC’s already great women’s sports coverage,” said Siren co-founder Danielle Warby.

A year after Katie Kelly first started competing in para-triathlons, she won a gold medal at the Rio Paralympics.

Disability teaches you about vulnerability and the willingness to let go. There’s a part of you that has to accept that to navigate your way through, you will need to rely on others.

Kelly Ryan stepped into the top job at Netball Australia after a stint with the AFL.

Other sports that are male-dominated have turned their attention to the female market. It’s something netball had a strong foothold on already.

Krystina Emmanouilides is paving the way for women in Formula 1

Krystina Emmanouilides was one of five women out of roughly 300 students in her engineering course at university.

I was doing research on the internet, but there wasn’t a whole lot of information, like, how do you get into F1? It’s a very exclusive field.

Stefanie Fernandez and Bree Walker are making themselves, and Australia, known on the international bobsleigh circuit.

Hitting podiums and coming top 10 in the world and doing amazing things, were things that I was told I was never going to be able to achieve.

Tazmin Gray wants to show younger women the way and lead from the front in the Titans’ NRLW team.

For us as female athletes, it doesn’t feel like we have been put on the back-burner; we feel like we are already part of the club.

AFLW wingers are becoming increasingly important, and a barometer of team success

Kaitlyn Ashmore and Steph Chiocci were the stand-out wingers of the most recent AFLW season.

Much of what a winger does in-game can go unnoticed. But the most important aspect of the wing role is the restraint to stay outside of the contest, rather than dive in.

‘The gold was the dream’: Olympic champion Jess Fox opens up about her new documentary, Greatest to Gold

Jess Fox makes navigating rough waters look easy. But in a new documentary, she opens up about her difficult Tokyo journey and what her uncertain future holds.

I never really pay attention to what people say in terms of like, ‘oh, I knew you weren’t going to do it’ or ‘I knew looking at you that you were going to win it’,” she said. “I’m like, ‘yeah, you don’t know anything!’

Bayside Futsal Women is a free social competition which is drawing in hundreds of participants.

Cultural, religious and family obligations play a huge role in their participation, but so does safety.

AFLW players to watch in 2022 — the newcomers, the veterans, the comeback stories and more

Bonnie Toogood, Áine Tighe and Stevie-Lee Thompson are among those likely to catch the eye in AFLW season six.

Women’s Ashes top 20: Players as organisers, a big investment and high stakes — this was the first women’s Ashes

87 years ago, Margaret Peden and Betty Archdale led their teams onto Brisbane’s Exhibition Ground. The 1934/35 Ashes serve as a reminder of what is possible when you step boldly to the crease.

Jane Ryan and Alexandra Almond loved footy, but playing it seemed out of reach — until the AFLW

For women of a certain age, playing Aussie rules wasn’t an option when they were children. It wasn’t something girls did. After years of watching her father and brothers play Aussie Rules, Jane Ryan joined a football club with her friends.

I can’t get across to you how joyful it was to be able to pick up a footy and hand pass and kick to a teammate, practise it and be in that space where that’s what we were focused on.

Women rarely coached high-level footy when Michelle Cowan forged her path, but that has changed with the AFLW

When coaching trailblazer Michelle Cowan did her AFL level two accreditation in 2008, she was the only woman in the room, surrounded by 86 men.

Now, 13 years on — as one of only three women to have been head coach of an AFLW side — the 39-year-old is excited about the growing number of female coaches in the league.

If AFLW hadn’t come along, these coaches would probably be stagnant and hitting their ceiling at state or academy level.

Women in sport stories from our emerging writers

Natasha Van Eldik is one of Australia’s best at bowls, but not all women have felt welcome on the green

By Felicity Smith and Kasey Symons

Natasha Van Eldik wants others to have the same positive experiences she has on the green.

At the time, I chose bowls because it was only $2 and the bowling club had the best hot chips in town. When people think of bowls they think it’s only for older people, that’s far from the case.

‘It felt like a cinch’: How Ngaliwurru woman Cecilia Johns conquered her first marathon

Cecilia Johns was one of 10 people to successfully take part in the 2021 Indigenous Marathon Project.

I wanted people to get out of their comfort zone and push themselves. I feel like so many people would just be sitting on the ground. I stood up. [So] it is like OK, I’ve run, now everyone else can stand up, and it’s that ripple effect.

I want to see more remote mob, more women [stand up]. Women are the caregivers and the ones that stay home.

Men go away and play footy. They get up and go into town, play and come back. I want to see women moving, getting outside.

In addition to our partnership with the ABC, Siren have also worked with Deakin University, Swinburne University, and Football Victoria.

21. Work behind the scenes - Siren: A Women in Sport Collective

Co-founders Kasey Symons, Kirby Fenwick and Gemma Bastiani catch up in this episode of the podcast to share what they've each been up to recently, and what Siren's been doing behind the scenes. -- Subscribe to the Siren newsletter: https://sirensport.substack.com Intro & outro music by Seja.