Skip to content
home AFLW, Aussie Rules, Cricket, Women in Sport Media Back to our roots: recognising the women that shaped our love for sport

I remember being at a family dinner maybe a year ago talking about footy—as I am wont to do—and my father turning to me and saying “who made you like this?”. It made me laugh a little because it seemed obvious to me. My Mum and her mum, my Nan.

As a kid if there was sport on, the TV was on and switched to that channel. It didn’t matter which sport: cricket, tennis, netball and, of course, footy. Mum grew up in the Victorian country town of Beechworth, and some of my clearest memories of summer holidays involve lounging around my Nan’s living room watching the cricket while Nan and Mum sat on their respective couches knitting away.

In the winter, it was footy. Nan was a Melbourne supporter, but really she was a Ron Barrassi supporter. Mum is also a Dee, beaten down by their lack of success post 2000. Seeing her face when we took her along to the Melbourne v Hawthorn semi-final at the MCG in 2018 was priceless. It didn’t matter who was playing though, if the footy was on we were watching it while little eight-year-old me drew pictures of Adam Goodes and Paul Kelly on the ground in front of the screen (I had the sponsor logos down pat).

I’m often asked why I go for Melbourne in the AFLW while being a Swans supporter in the men’s. It’s because of my Mum and because of my Nan. In a few (hopefully short) years I’ll have a tough decision to make when it comes to my AFLW allegiance.

Their love for sport, and insistence that it was key to everyday life, is the reason I love sport—and specifically footy—now. They’re the reason I spend (almost) every waking moment watching highlights, looking at stats or writing about the game. It’s exciting, unpredictable and inspiring, but also nostalgic and comforting. Sport for me is my Mum and my Nan.

My Mum is intelligent, witty and SO passionate about sport, specifically footy and more specifically, the Carlton Football Club. I like to think that I get all of my best traits from my Mum… okay, so the jury might be out on my intelligence and wit, but she definitely passed on her passion for footy.

I’m not quite sure what she was thinking at the time but Mum, a lifelong Blue, married an Essendon supporter (the horror). When my older sister came along, Dad—thinking he was quite clever—claimed her as a Bomber. Fast forward a few years and Mum and Dad found out they were expecting again.

As my Mum tells it, when she was pregnant with me she had a disturbing vision of having two children who were Essendon supporters and being forced to watch Essendon games for the rest of her life. It was then that she took decisive action. In an effort to ward off the red & black menace, she claims she sang ‘We are the Navy Blues’ to me in the womb. I’m still not sure if that is actually true but nevertheless, I came screaming into the world as a dyed-in-the-wool Carlton supporter.

Mum first started taking me to games at Princes Park at the tender age of three. It was our weekly ritual that we refined down to a fine art over the years. We knew exactly where to park, plus our second-chance car park if there was a big crowd. We had our regular seats on the wing behind the interchange bench and had other seats in the Legends Stand where we’d sit if it was raining. We’d have homemade sausage rolls and a thermos of hot Milo.

We’d always get there early enough to watch the reserves and pick out the next up-and-coming talent. We’d ride every single bump, listen to the talkback radio after the game and watch the replay or highlights when we got home. This was how I spent my weekends, just me and Mum.

Things changed quite a bit in my late 20s. I got a job at Carlton and most of my dreams came true, except it meant that I stopped going to the footy with Mum. Footy became work, and as much as I loved it, the experience also wore me down. My relationship with AFLM and Carlton are a bit complicated now.

In mid 2014 I was fortunate enough to discover women’s footy and it helped me fall in love with the game all over again. My community team is like family to me and AFLW makes my heart sing. I initially thought my women’s footy love affair had something to do with feelings of nostalgia and “the way footy used to be”, but really, I can pin it all back to Mum.

Through our shared love of sport and footy, she showed me how to follow my passion. She taught me about tradition, ritual and what it means to be part of a community. She taught me that sport is a way to lose yourself, find yourself and be yourself. And finally, she taught me that “just kick the bloody thing” is a metaphor I can apply in just about all aspects of my life.

Thanks for everything Mum. I love you.

I had one of those moments a few years ago, those moments of a dawning awareness as you look at one of your parents and everything seems to make sense. I’m just like my mother.

It was the 2012 Elimination Final. I was working for the AFL at the time and had got my Geelong loving mum into a function room at the MCG to watch her beloved Cats take on Fremantle. As the game slipped away from Geelong, and I watched her pace the room from behind the glass, unable to stay still, muttering her disdain under her breath as her team’s premiership hopes faded, my boss came up to me as I was watching her from the other side of the room, ‘Is that your mum?’ she asked pointing to the perplexed fan. ‘Yes’ I responded, the light switch going off. That’s where I get it.

The older I’ve got, the more privilege I’ve had to become best friends with my mum. We do so much together, we travel together, go to concerts and theatre, shop, eat, drink and of course, go to lots and lots of live sport.

This might be pretty standard for those of us who like to, or are able to spend time with our parents, (or maybe it is total parental overload and I’m very weird – I don’t care!) but I guess what makes this special to me is my mum lives 600 kilometres away from me back in my hometown of Mildura.

Mum makes the twelve-hour return trip in the car down to Melbourne as many weekends as she can to catch a Cats game or head to the basketball, or just check out whatever else might be on. Sometimes she comes with my dad, he’ll only come for a Tigers game. She loves Geelong, but she’ll go to Eagles games with me, and I’ll go to Cats games with her, then we’ll just go to any game of footy together because we just like going to watch footy together. She’s been with me to so much sport I really do think my inherent sports fan-ness is all her doing.

We’ve been so lucky to be able to travel overseas together a few times and I’ve learned there are some sports she’s not so enthused by. I still laugh at the memory of her falling asleep at Wrigley Field after I made her and my sister go on the full tour of the ballpark, then wander the surrounding merchandise outlets for three hours before watching the Cubs take on the Red Sox. I promise I won’t do that to you again mum.

But we’ve been to NBA & WNBA, college football and ice hockey. On Mother’s Day 2017, my brother and I took her to Lagasse’s Stadium, my favourite sports bar in Las Vegas to watch the Western Conference finals, I mean, to have a delightful Mother’s Day lunch of wings and beer buckets. It sounds like we did the dirty on mum, but it was the best! Drinking beer with mum, watching the NBA, I just love that I can do that with her.

Mum doesn’t get in too many photos with me, mostly as I demand that she just take photos of me—you know, for my ‘Gram, but here are some of the places she’s come to watch sport with me, and she’s definitely perfected her photo skills. Thanks for being my best sports fan friend mama, and for taking on average fifty photos of me at every stadium for me to post just one. 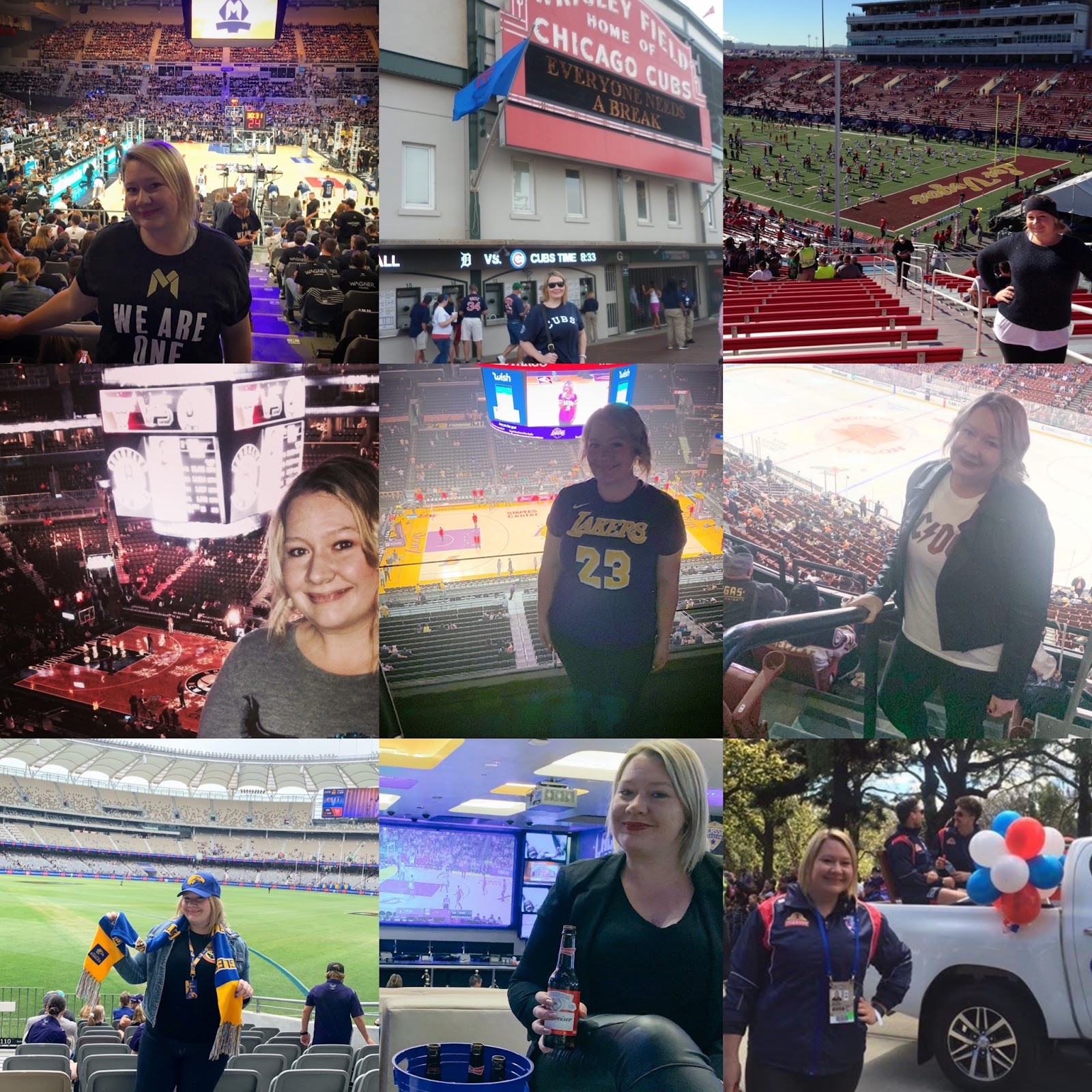 All photos taken by Veronica Symons, with Kasey Symons yelling at her to get a better angle.

2 thoughts on “Back to our roots: recognising the women that shaped our love for sport”

Co-founders Kirby Fenwick and Kasey Symons chat about how we mentor emerging writers, and how the ABC has helped us do it more. -- Subscribe to the Siren newsletter: https://sirensport.substack.com Intro & outro music by Seja.